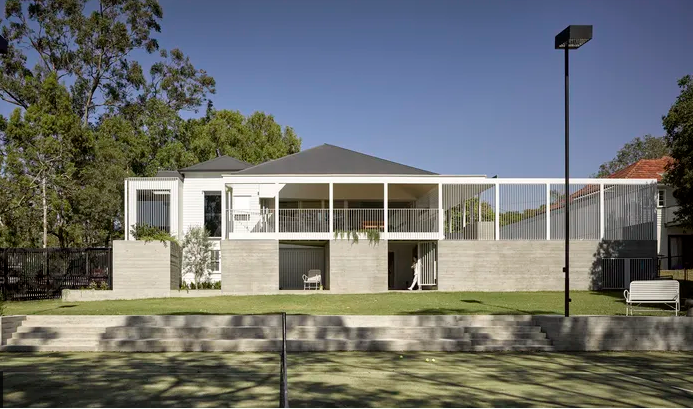 Park Road House in Yeerongpilly, designed by Lineburg Wang, has been selected “Brisbane House of the Year,” during the annual Regional Architectural Awards held by the Australian Institute of Architects (QLD Chapter).

“Naturally, our architects are accustomed to adapting to changing environments and they embraced the online celebration with a fervour and camaraderie that is indicative of Queensland designers,” Michael Lavery, President of the QLD Chapter, said in a statement about what has been the first virtual ceremony the industry association has held in its 80 years of existence, a nod to the coronavirus restrictions.

Park Road House, Brisbane’s House of the Year, is inspired by a traditional Queenslander, with new elements by Lineburg Wang giving it a refreshing, bespoke elegance that enhances its traditional lines and brings it to a luxurious, new level.

The lines are sharp and airy, combining the traditional Queenslanfer with elements such as an elegant configuration of decks and a new pool.

Using the regulatory pool fence as a design feature, a concrete podium raises the pool to the same level as the public rooms. This creates a robust area that contrasts beautifully with the line of the vertical screen enclosure above.

The judges praised Park Road House as “…an elegant addition to a grand Queenslander… contemporary yet sympathetic to the existing.”

The home’s owners, who have lived there for three decades, consider Park Road House to be a “celebration of retirement”.

Aside from noteworthy projects in Central, North, and Far North Queensland; Darling Downs and West Moreton; Gold Coast and Northern Rivers; and the Sunshine Coast, 23 projects in Brisbane were part of the lineup and more than a dozen were recognised.