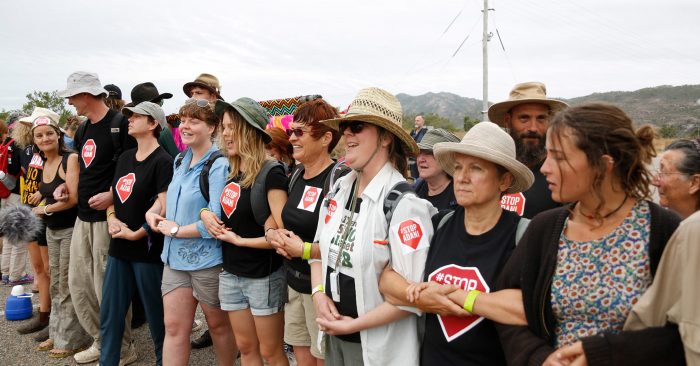 A Stop Adani community group in Annerley will be hosting a Frontline Information Session on 2 February 2020, in an effort to encourage more people to step up to stop the controversial Carmichael coal mine project.

“Adani has started building the Carmichael coal mine so it’s time to head to the frontlines and protect the Galilee – for climate and for our future. At our local community Galilee Rising Info Session in Annerley you can find out how you can be part of an unstoppable movement of Australians who are stepping up to stop Adani and are bringing forward a renewable energy future. People just like you and me – scientists, tradespeople, teachers, nurses, priests, students and people of all ages who are saying enough is enough.” – Tom Cotter (#StopAdani movement, Galilee Rising)

“Sometimes we need to take brave steps to protect the things that matter most. This is one of those times,” the Galilee Rising website said.

“Lining up there, behind Adani, are billionaires Clive Palmer and Gina Rinehart, desperate to build their own mega mines.

“We cannot afford these coal mines. They will drive more dangerous climate change, trash Aboriginal land rights, cause more bleaching of the Reef and rob us of precious water in the middle of record breaking drought.

“When governments don’t listen, citizens need to lead and when laws fail to protect us then we have no choice but to take bolder forms of action.

“It’s time for all of us to rise and protect the Galilee.

About Carmichael Coal Mine and Rail Project

The $16.5-billion Carmichael thermal coal mine and rail project by Adani Mining involves construction of an open-cut and underground coal mine, set to be the largest coal mine in Australia with an estimated yield of 60 million tonnes per annum. It will also include the construction of a 189-kilometre railway line.

The coal mine will be built north of the Galilee Basin in Queensland whilst the railway line will run from the mine to Moranbah. From there, it will join the existing Goonyella rail system, connecting to the Port of Hay Point and the Port of Abbot Point coal terminals.

The coal mine project has been a controversial one and has met a series of legal challenges, causing its six-year delay. Despite the project’s claim of economic benefits, environmental groups, activists, and civilians have strongly opposed the development because of its potential environmental impact.

#StopAdani movement said that if built, Adani’s Carmichael thermal coal mine and rail project will:

“Peaceful protest is one of the few avenues of action that we have left to highlight the urgent need to stop this mine. It helped to save the Daintree rainforest, the Franklin River, Jabiluka in Kakadu, and it will help stop Adani.

“The Adani project from pit to port affects Wangan and Jagalingou, Jangga, Birri and Juru Peoples and their lands.”

The Galilee Rising Frontline Information Session, hosted by StopAdani Annerley and surrounds Community Group, will be held on Sunday 2 February 2019, from 2:00 p.m. to 4:00 p.m. at 2/107 Chester Road in Annerley.

For more information about the event, you may visit this page. To register, click here.